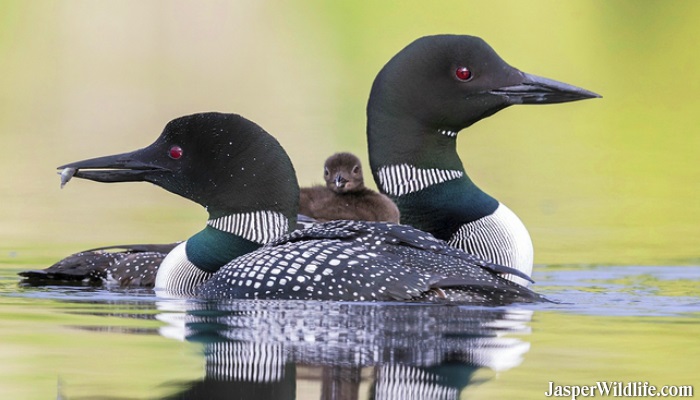 Canada's loon is a large diver of the family of birds. The common loon is the provincial bird of Ontario, and it appears on Canadian currency, including the one-dollar "loonie" coin as well as previous Canadian $20 bills.

Loons eat a variety of animal prey including fish, crustaceans, insect larvae, molluscs, and occasionally aquatic plant life. Loons swallow most of their prey underwater, where it is caught, but some larger items are first brought to the surface to consume.

Loons are monogamous, breeding together for up to a decade or more. Both loons in a pair typically build a large nest out of dead marsh grasses and other plants formed into a mound along the vegetated shores of lakes. A single brood of young is raised each year from a clutch of one or two olive-brown oval eggs with dark brown spots which are incubated for about 28 days by both parents.

Loon chicks fledge in 70 to 80 days. Chicks are capable of diving underwater when just a few days old.

Breeding adult Loons have a broad black head and neck with a greenish, purplish, or bluish sheen, blackish or blackish-grey upperparts, and pure white underparts except some black on the undertail coverts and vent. Non-breeding adults are brownish with a dark neck and head marked with dark grey-brown. Loon males and females look alike, although males are significantly heavier than females.

In Jasper, Alberta, loons prefer to live on lakes and other waterways. Loons typically spend their winter on both coasts of the US and as far south as Mexico, as well as the Atlantic coast of Europe.