An Owl that can turn its head 270 degrees, Canada's Great Grey Owl can be as tall as 33 inches with a wingspan of up to five feet across(1.5m). The Great Grey Owl is very large, documented as the world's largest species of owl by height/length. Additionally, the Great Grey Owl has the Best hearing among Owl species. 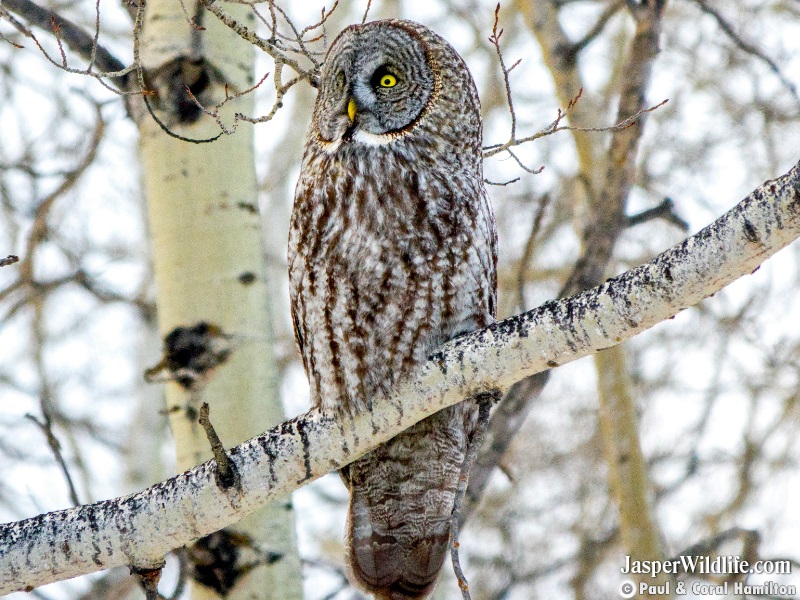 The Great Grey Owl lays eggs from March to June, depending on temperature in its habitat. Great grey owls do not build nests, rather they typically use nests previously built by a large bird, such as a raptor. Great Grey Owls may also nest in broken-topped trees and cavities in large trees. 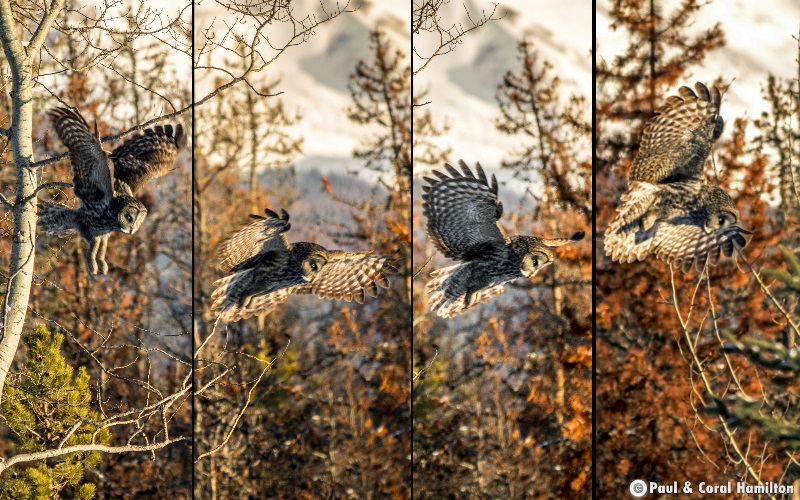 The female Grey lays 2 to 5 white eggs. The female incubates the eggs for about 28 days. Both parents feed their young, tearing meals into small pieces to feed the chicks. Once the chicks replace their down with feathers, they start learning to fly. Great Grey Chicks in this stage can be seen walking on the top of their nests flapping their wings. After three to four weeks, the chicks will leave their nest for good. 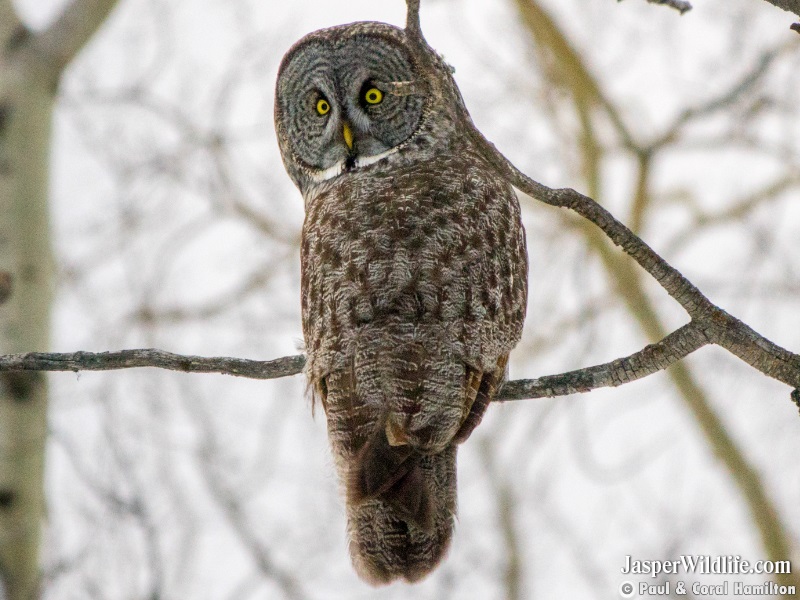 Adult Greys have large rounded heads with a grey face and yellow eyes with darker circles around them. A dusty gray color, the Great Grey Owl's facial disk is considered the largest among predatory birds with no ear tufts. A black spot on its chin surrounded with white marks on either side makes the Great Grey Owl look like it's ready for the ball.. wearing a bow tie! 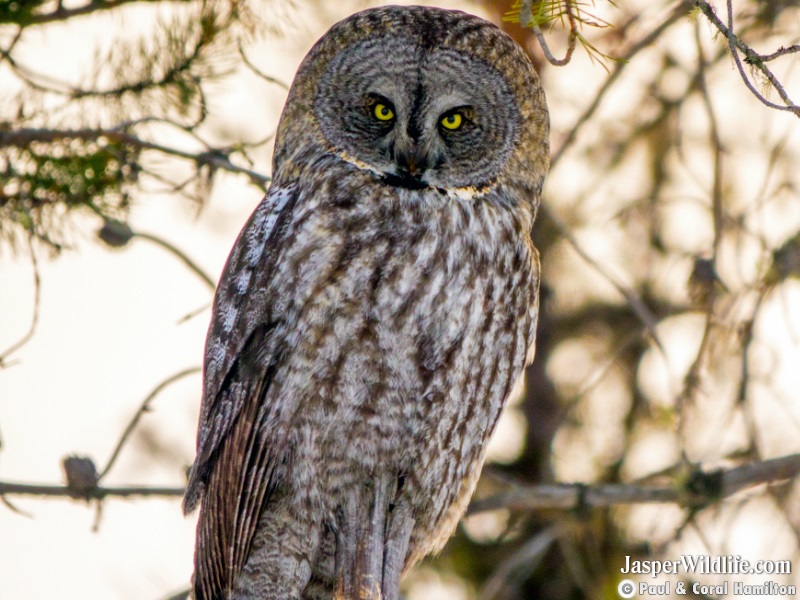 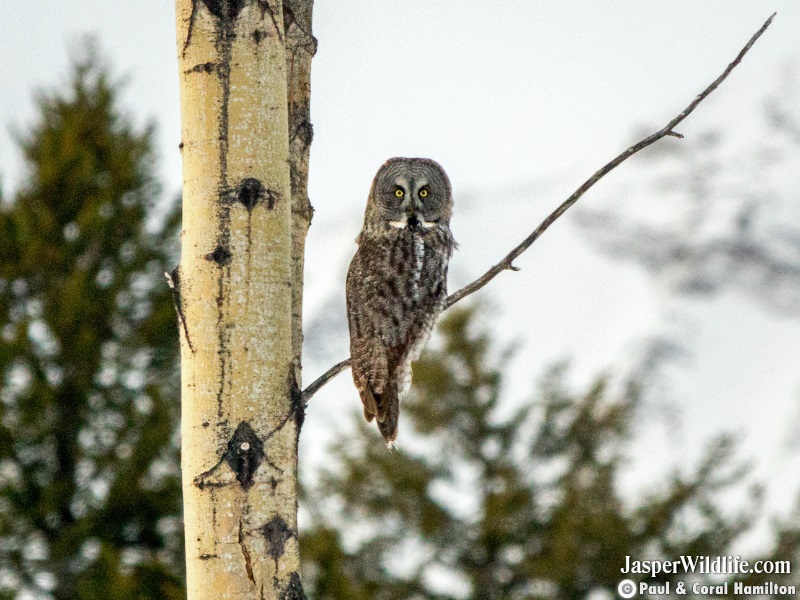 The Great Gray Owl is typically found in dense, coniferous forests in Canada. In the winter, the Great Grey Owl often thrives on the edge of woodlands, bordering open fields on which to hunt, but may also live near brackish tidal meadows. The Great Grey Owl is quite reclusive and not often seen by humans. 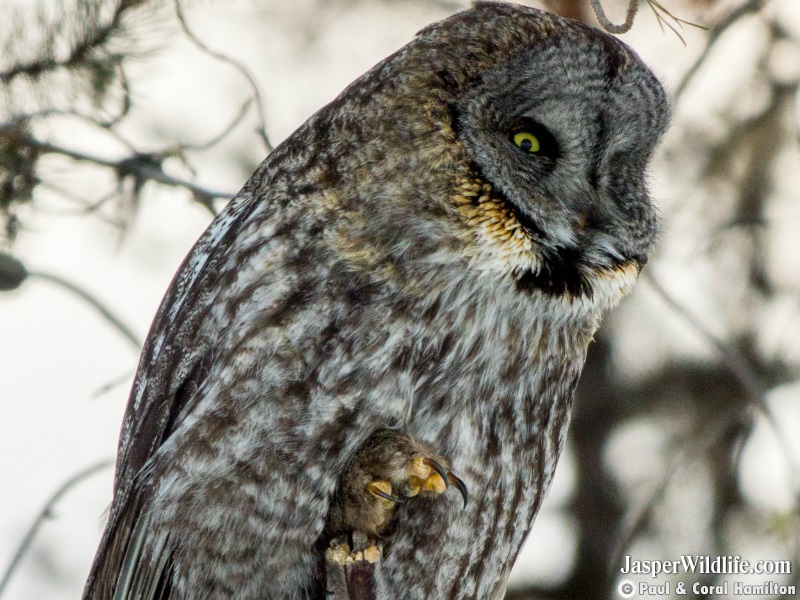 Great Grey Owl diets are mostly made up of small rodents like voles, gophers and mice. Occasionally, greys will eat shrews and even other birds. To hunt, the Great Grey Owl perches on a tree overlooking an open area. It's tremendous hearing allows the Owl to accurately locate prey below feet of snow. From its perch, the Great Grey Owl will plunge through the snow to capture its prey. In winter, Great Greys do not move far but may go downslope to escape deep snow as they must capture their prey on the ground. 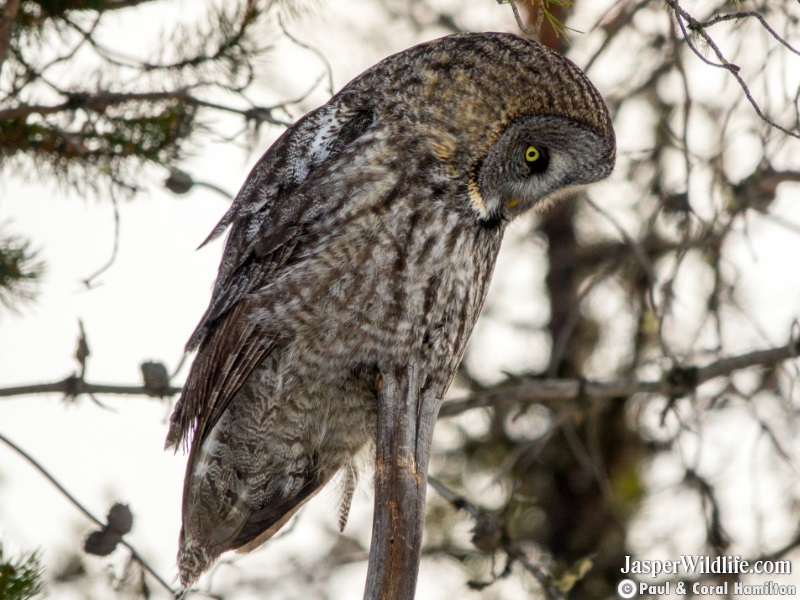 These amazing birds will wait, listen, and watch for prey, then swoop down.. but may also may fly low through open areas in search of prey to feed on. Great Grey Owls frequently hunt from a low listening post which could be a low tree limb, fence post, or even road sign. The Grey's large facial disks, also known as "ruffs", focus sound and the asymmetrical placement of their ears assists them in locating prey. Because of the lack of light during the late and early hours in which they prefer to hunt, they rely on this incredible hearing ability immensely. On their nesting grounds, they mainly hunt at night and near dawn and dusk, but are typically active mostly during the night. 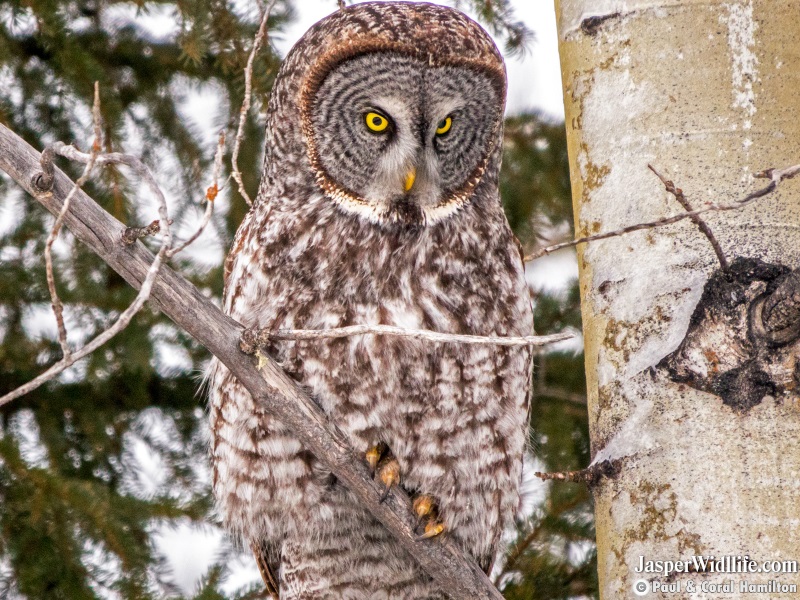 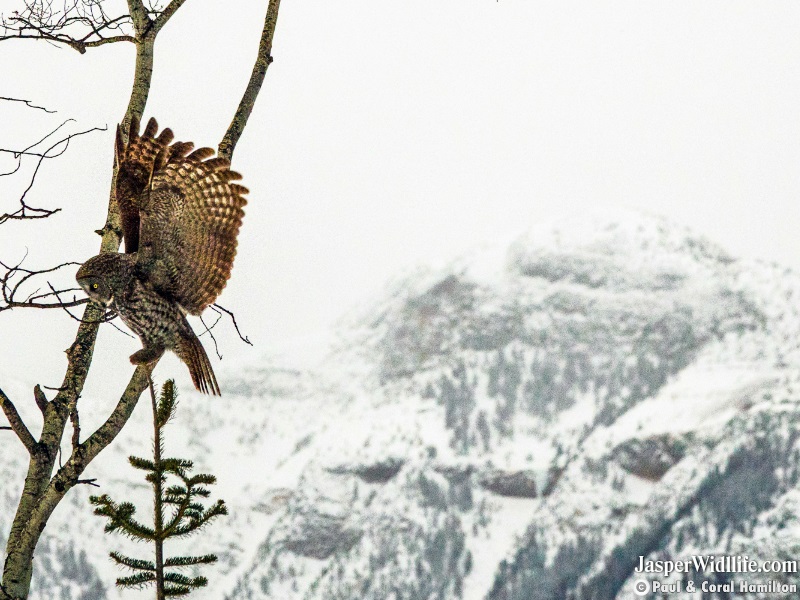 Great Grey Owls can crash to a snow depth roughly equal to their own body size to grab their prey. Only this species of Owl and other fairly large owls from the genus Strix are known to "snow-plunge" for their prey, a habit that is thought to require superb hearing not possessed by all types of owls.