First encounter with a special Grizzly Mother and her newborn cubs this year.


Our First encounter with a special Grizzly Mother and her newborn cubs this year. She is such a patient and well tempered Grizzly sow and we are now lucky enough to witness her with her second set of Cubs over the last several years. It was an exciting day as we were not certain she was okay over the Winter, but clearly she was. Grizzly Bears produce only two or three cubs every three years and their survival rate is unfortunately very low. Everyone in this location of Canada's Rockies will be Cheering this family on in 2020!

Where do Grizzly Bears Live?

These two Cute Grizzly Cubs of the Year are seen here working on their tree climbing skills.


Grizzly Cubs of the Year Playing and Exploring Canada's Rockies

Grizzly Bear Cubs of the Year Playing and Exploring Canada's Rockies in 2020. These two Grizzly cubs are so entertaining to watch while they Play. Cubs of the year mainly focus on three things.. Mother's milk, exploring/learning, and Play!

As evening approaches, these Grizzly Bear Cubs of the Year gradually slow down and become more affectionate with each other and Mum. These are typical signs near feeding and bedding down times for Grizzly families that are not stressed in nature.


Identifying Grizzly Bear Mothers in care of Cubs of the Year

This Grizzly may be able to pick and eat 30,000 Berries a Day. Grizzly Bears' sensitive, mobile lips gather berries quickly and swallow them whole. The seeds then pass through their digestive tract unbroken and able to germinate, spreading the seeds of their favorite berries all over their home ranges. Notice how the bushes stay completely intact for future growth. Berry season has become an important period of weight gain for Grizzlies in the Canadian Rockies that starts in July.

One of Jasper's Largest Grizzly Bears in Spring.

Grizzly Bear Eating Lush Vegetation
A lot of rain in the Rockies(July 2019) has ignited the landscape with lush vegetation. Grizzly Bears may completely avoid areas that humans frequent, leaving many berries uneaten. Even though less energy-rich, it is more reliable for Bears to feed on insects and vegetation, however, a mostly vegetarian diet does require a very efficient process of consumption.

A Grizzly Bear focused on insects, even with an abundant Berry crop just as accessible in Jasper.


Grizzly Bear Mother with Cubs of the Year


We don't think we have seen this Grizzly before, but she was certainly not shy about her travel, as you can see. Luckily, she didn't spend too much time near the highway and took a turn North.. possibly to a Canadian Rockies area that is very isolated to prep for her Hibernation. It's nice to see a Big Belly on a Bear this time of Year. 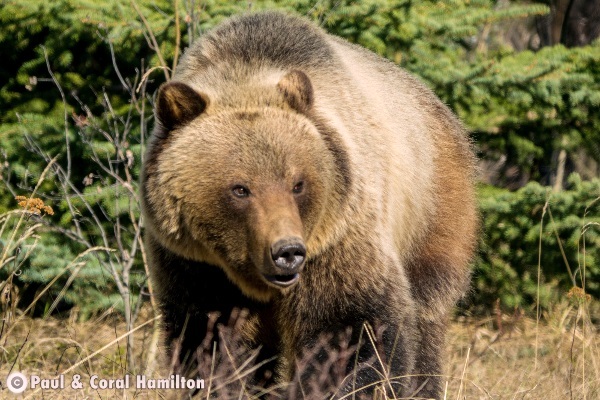 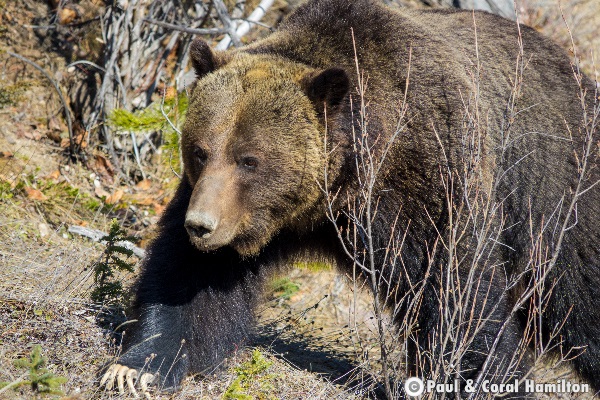 Taxonomy: While there has been much confusion about the taxonomy of brown bears (Ursus arctos), taxonomists agree there are at least two subspecies in North America -- the grizzly bear (U. a. horribilis) and the Kodiak bear (U. a. middendorffi). The Kodiak bear has lived separately on Kodiak, Afognak, and Shuyak Islands in southwestern Alaska for thousands of years with no interbreeding with other populations. However, there is no such geographic demarcation between the coastal U. a. gyas and the inland U. a. horribilis. There is a continuum of difference between the larger coastal brown bears and the interior individuals that are generally called grizzly bears. 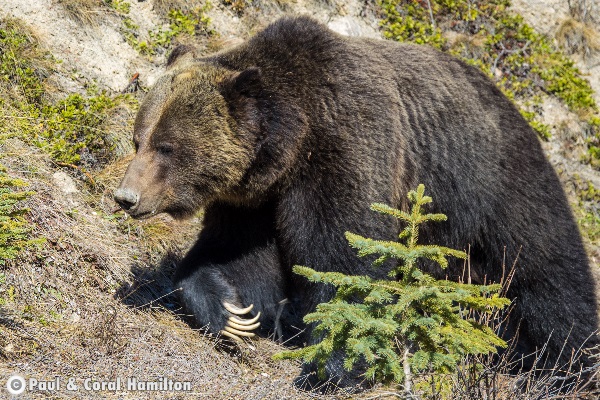 Simply separating the Bears' names are that Coastal brown bears have a greater amount of animal protein in their diet, achieve larger size, and have slight differences in coloration.

Home Ranges: Grizzly bears can be found in the Canadian provinces of British Columbia, Alberta, Yukon, and the Northwest Territories; and the US states of Alaska, Idaho, Wyoming, Washington, and Montana. In general Bears' home rangea are between 10 and 380 square miles. A grizzly bear's home range is basically inland - away from major bodies of water. In most cases, a grizzly bear's home range includes an area of forested land or shrub cover, which is used mostly for escape.

Gathering and Eating Food: Grizzly bears feed on berries (blueberries, bearberries, buffalo berries, etc.), roots, bulbs of plants, ground dwelling rodents, and whitebark pine nuts. Sometimes grizzlies will locate a cache of these nuts that a ground squirrel has stored for the winter. With their excellent sense of smell, grizzlies can locate carrion from miles away and will readily feed on it. These easy meals are fiercely protected by any Bear.

Grizzlies may also prey on moose, elk, mountain goats and mountain sheep. During the spring months, grizzlies also feed on the calves of these animals.

Another major food source for grizzlies are cutworm moths. During the summer months in the Yellowstone area, these moths congregate on sub-alpine plants located above the timberline at elevations higher than 10,000 feet. During the early morning hours these moths drink nectar and then during the day they cluster on the surrounding rocks. Grizzlies from all around climb to these high elevations to consume 10,000 to 20,000 of these moths a day. At times like this, when food is abundant, numerous grizzlies will congregate and feed together. Once the food source is depleted, the grizzlies will go their separate ways in search of other food.

Kodiak bears generally rely on the same types of food as grizzlies, with one addition. Living in coastal areas provides these bears with a rich supply of protein. These coastal areas are so rich in salmon that a 40% higher density of brown bears can be supported in those locations.

Face: Brown bears have a concave or dish-shaped face.

Paws: Grizzly bear paws are black or brownish in color with wrinkled skin on the pads.

Shoulder Hump: Brown bears have a distinguishing shoulder hump. This hump is actually a mass of muscle, which enables brown bears to dig and use their paws as a striking force. This hump may have evolved as Grizzly Bears focused more on digging for roots; the muscle mass being an adaptation through natural selection. 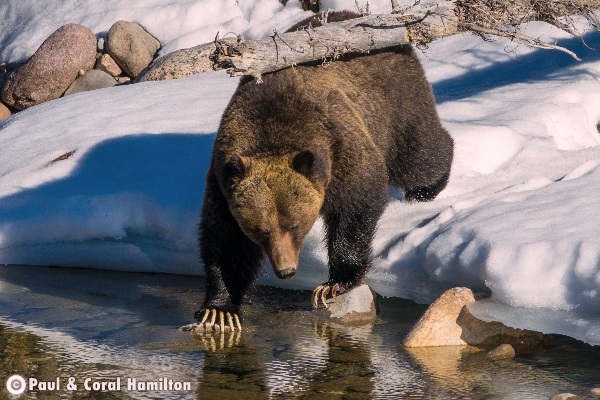 Claws: Brown bear claws are long and curved, ranging in color from yellow to brown. In rare cases grizzlies have been observed with white claws. These claws are used to dig up roots and bulbs of plants as well as to excavate den sites. While extremely strong, Grizzly claws are not adapted well for tree climbing. 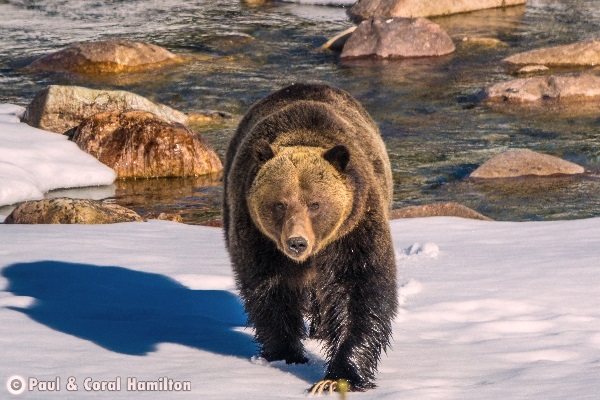 Tracks: The toes fall close together and nearly in a straight line in a brown bear track. The toe pads are generally touching each other with the smallest toe on the inside of the track. Impressions from the fore claws are usually found far in front of the toes because the claws are twice as long as the toe pads. The front tracks of brown bears measure 6-8 inches long (excluding the Bear's heel) and 7-9 inches wide. Hind tracks measure 12-16 inches long and 8 to 10.5 inches wide. 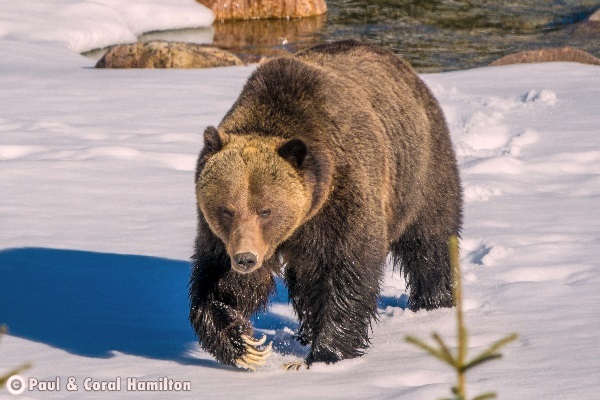 Coloration: Grizzlies range in color from white, blonde, brown, black and shades there of. The tips of most fur are lighter in color giving them that "grizzled" effect.

Growth and Development: Brown bears can weigh 150-200 pounds at the end of their first year of life. They reach sexual maturity between 4 and 5 years and are considered fully grown by 8 to 10 years of age.

Surviving in the Wild: In general, Grizzly bears will flee as soon as they detect humans. Finding food, finding mates, and avoiding being preyed upon govern a brown bear's life.

Most brown bears are active during the morning and early evening hours. During the daytime they rest in day beds, often constructed in dense cover to escape the heat. During the late summer and fall months, when they are fattening up for the long months of hibernation, brown bears may be active throughout the day. As food items become scarce, the brown bear's territory increases. Within their home range, brown bears use a wide variety of habitats. Brown bears travel from alpine food sources to estuaries, to berry patches, to salmon spawning sites - visiting each site when its particular food source is available.

Dens: Dens must provide protection and security during the winter months. Brown bears can excavate a den but often use rock caves and hollow trees. Dens are dug in dry, stable soil where winter temperatures will remain above freezing. Usually the den site terrain is sloping. As snow falls it covers and helps to insulate the den. Generally the den is just large enough to accommodate the bear. The entrance to the den leads to a tunnel that slopes downward to the actual sleeping chamber. This sloping tunnel allows stale air to escape. Most dens are used only once. Occasionally a den built in unstable ground will collapse. 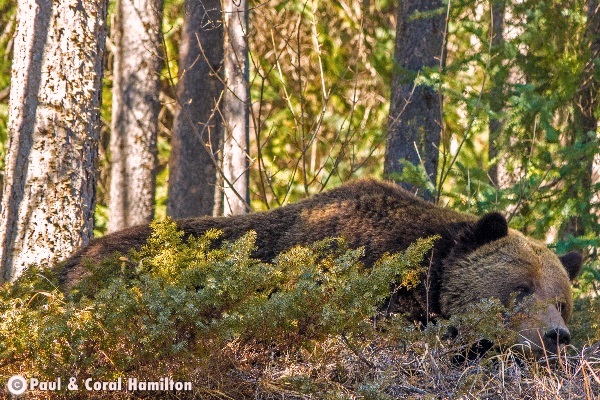 Hibernation: Grizzly Bears usually hibernate by October lightly, and enter a deeper sleep in November. By March, their metabolism begins to rise with most Bears leaving their dens in April. Males have more energy, with females remaining a little more lethargic until May.

Grizzly Bear Mating: Females generally are able to reproduce between 4.5 and 10 years of age. The number of cubs in a litter depends upon the female's health and/or body weight. Mating occurs between early May and mid July with cubs born between the end of January and early March. Usually a female brown bear reproduces once every 3 to 5 years. Since only 1 in 3 females breed in a given year, males must range widely in order to find a mate. A mother brown bear will remain with her young for 1.5 to 3.5 years.