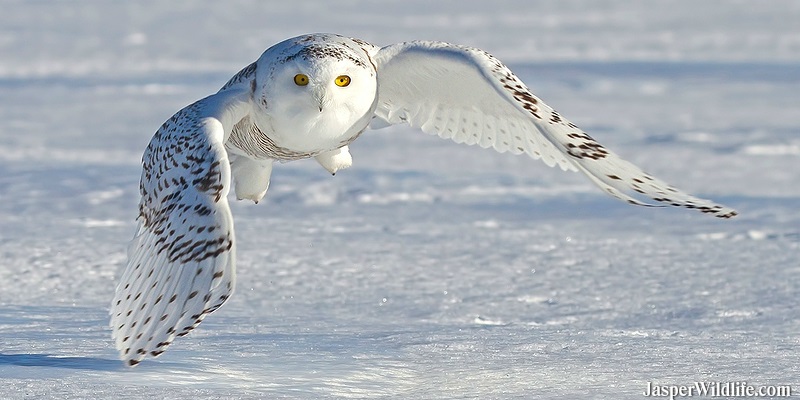 Snowy Owls are one of the heaviest of Canada's owls. The Snowy Owl is a diurnal bird of prey(more active during the day).

Male snowy owls may be almost pure white in colour, with adult females being darker.. their white feathers barred with dark brown. Young snowy owls of both sexes are more darkly marked. Immature males resemble adult females, and immature females are heavily barred, appearing even dark grey when seen from a distance. While the white coloration of Snowy Owls provides camouflage in winter, this advantage is obviously lost in summer.

Snowy Owl's dense layer of down over their entire body enables the bird to stay warm even when the air temperature reaches -50C.

Snowy Owls are shy and usually silent, unless they are nesting. Snowy owls will hiss, scream, or snap their bill at intruders and even dive at, and strike any intruders near their nesting sites. During the breeding season, males will hoot loudly as well as attack any other intruding males.

Their bright yellow eyes are surrounded by disks of stiff feathers that reflect sound waves to the ear openings located immediately behind. A Snowy Owl's bill is black and almost hidden by surrounding feathers. Snowy Owl's amazing hearing helps this bird to detect prey in dim light, when vision is limited. Powerful feet are equipped with curved, black claws 25 - 35 mm long, and can quickly subdue even the largest prey. Eyes of snowy owls do not move in their sockets. To look to the side or to follow a moving object, snowy owls must swivel their heads. Their eyes contain many light-gathering cells allowing to detect small objects moving at great distances. As in other owls, the visual fields of the two forward-directed eyes overlap widely. This binocular vision gives owls excellent ability to judge distances.

During breeding season, Snowy Owls are typically found from the treeline to the northern limit of Canada, preferring high, rolling tundra with tall points of land for nest sites. During winter in southern Canada, Snowy Owls prefer prairies, marshes, open fields, or shorelines; habitats that resemble the treeless tundra of their breeding range. Snowy Owls may travel in winter, establishing and defending hunting territories for periods of two or three months at a time.