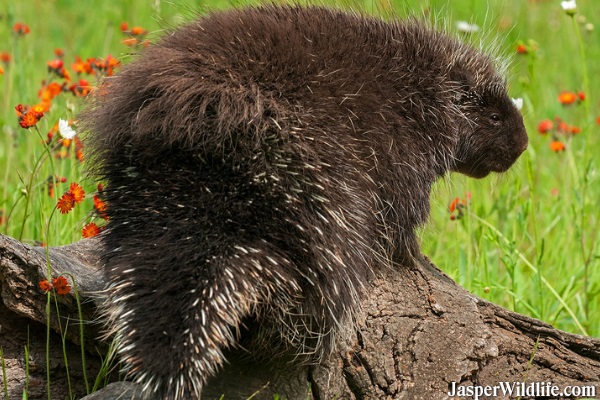 How large is Jasper Alberta's Porcupine?

Where do Porcupines Live?

Can You Hug a Porcupine? Thousands of Reasons to Back Off!

We think this amazing porcupine is absolutely adorable. She was actually quite sociable for a wild outback Canadian Rockies creature. We only get a chance like this every few years, so it was a joy to capture this porcupine acting naturally in nature. She looked like she had recently used her defenses. Once she ate and found her space, she fell asleep among these trees and was not to be disturbed.

Details on the Jasper Porcupine

When approached by predators, the porcupine faces away from its enemy, raises its spines in a threatening gesture, and rapidly lashes out with its barbed tail. The quills of the porcupine are not thrown or shot but easily detached after contact with a predator's flesh. Porcupines have poor vision but good senses of hearing and smell. The voice of the common porcupine has been described as a combination of moans, whines, grunts, squeeks, snorts, and shrieks.

The animal's feet are heavy with naked soles. The front feet have four toes while the hind feet have five toes. Each toe has a strong curved claw.